Does Arthritis Really Hurt More In The Cold? 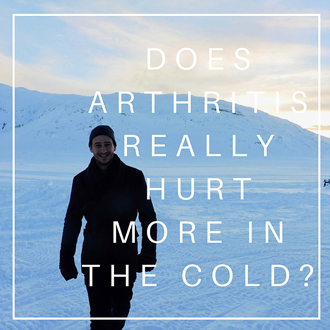 That’s a photo of me freezing in Iceland. This last week in Sydney hasn’t been too much better.  We often hear people tell us their arthritis pain worsens with the cold. Others say their pain is worse with the rain. But is this merely an old wives tale or is there something to it?

A 2015 study with 810 participants found “a significant interaction between daily average humidity and temperature on joint pain”. They also found “the effect of humidity on pain was stronger in relatively cold weather conditions”. So, this large study found that cold and humidity contributes to arthritis pain but there are also decent studies that contradict this.

If there is a relationship between weather and pain, is the weather directly causing arthritis pain or is it merely a correlation caused by another related factor? Any true causal effect between weather and pain is going to be exacerbated by people having a flatter mood, caused by the depressing weather. A drop in mood can greatly affect pain perception. Pain levels are also worsened by the inactivity resulting from decreased outdoor exercise. So weather may be only influencing pain indirectly via mood and exercise responses or perhaps it’s both directly and indirectly.

There is another weather factor that causes increases in pain – barometric pressure. It appears barometric pressure is associated with increased arthritis pain. Pain is worse with low pressure systems. While this could be due to the weather these systems produce, there is also a theory that decreased atmospheric pressure causes anatomical structures to swell making them more sensitive.

So there you go, arthritis pain caused by the cold might not be an old wives tale after all!