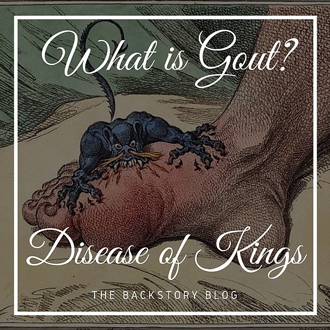 Gout is an extremely painful condition that can affect joints throughout the body but it is not even caused by musculoskeletal injury. So what is gout? And why is it called The Disease of Kings?

Gout begins in bodily systems entirely separate from the musculoskeletal system. The excruciating joint pain that gout generates occurs when the blood stream contains increased levels of uric acid. The uric acid in the blood then form crystals that deposit in a joint. It is these crystals that cause the inflammation and pain. Uric acid levels go up as a consequence of eating certain foods such as beer, red meat, liver, anchovies and peas. Most of this food was only available to the very wealthy which earned gout its reputation as the rich man’s disease. Gout can also occur as a result of chronic kidney disease. Uric acid accumulates in the blood if the kidneys aren’t functioning and are unable to filter the uric acid out of the bloodstream.

Gout most commonly occurs in the big toe but also presents in the ankles, knees, fingers and elbows. The pain of gout can be so great that it’s unbearable to have a bed sheet resting on the affected area. The affected joint is easy to spot because it becomes red, hot and swollen and after many attacks sufferers notice small lumps forming under the skin. Attacks last for three to ten days without treatment. Unless steps are taken, gout attacks usually return to the same or other joints in the body.

Gout is treated with anti-inflammatory drugs that are taken to reduce the pain and swelling of acute attacks. To combat the origin of gout, sufferers are encouraged to avoid overindulging in the rich foods mentioned above in order to lower their uric acid levels. Medications can also be given to encourage the body to eliminate the uric acid.

I hope this clears up some of the confusion surrounding gout. Feel free to e-mail with any questions you might have.

Fun Fact: Hay fever (which is an allergic reaction to environmental particles) until recently was another condition only present in the aristocracy. The life of the aristocracy was lived away from the land. This caused their immune systems overreact whenever they encountered pollen or other natural allergens giving them sinus symptoms. Hay fever then became hugely fashionable because of its association with high society with people exaggerating any incidence of hay fever to appear posh. Today, most people’s lives are disconnected from the land and Hay Fever is mightily common.